It’s been a two weeks since I was packing for the retreat. I haven’t gotten any more writing done on the novel, but I’ve finished another two beta reads for Broadcast and finished a short story (very short) that I had started some vague time ago, but was super excited about it at the time. I’ve since been to an amazing concert with my brother, worked the day job as normal, and I guess nothing else. But now, I’m packing again. This time for the far off land of Oshawa and it’s local Comic Convention.

Oh, I just remembered that I got a haircut. Does that count as something exciting? I suppose not since it was just my normal haircut. There will be some exciting news coming to Adventure Worlds soon, but I can’t talk about that, yet. So, never mind. I have noticed lately that some conventions have been going by Comicon and some do Comic Con. Not that it matters. I suppose I’m just stalling. 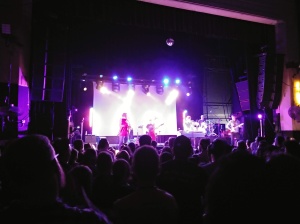 I don’t know why. I’m not nervous about writing this post or anything. I have a couple of things to write about. That’s more than enough for me to e-x-p-a-n-d into a whole post. The big one is the con. As I’ve said. I haven’t been to Oshawa for an event (or maybe ever). I’ve certainly driven past it, but now I’m going to be spending a whole day (and the previous evening) there. As the first out-of-town con of the year, I’m hoping for big things. I can stand to make some sales and spread the good word of The Synthetic Albatross. Broadcast won’t be out, but I can try to hype it up a bit. Really, the goal is to balance earning some cash with not spending too much and hopefully walking away with some pocket money. (I don’t count the initial cost of the books, though. I doubt I could keep doing this if that were the case).

Usually it’s a good time, but a long day. Thankfully, I have Christian there with me. It lightens the load a bit and cuts down on cost. How we still spend every four hour car ride talking about Star Wars, I’ll never know.

The other thing I wanted to mention was the concert I went to with my brother. They Might Be Giants has been my favourite band since twelve-year-old Ben first heard them in 1993 (or was it eleven-year-old Ben in 92)? Either way, a long time ago. They have been putting out albums every two years (or less) since the mid eighties and they still tour like mad. This year is the 30th anniversary of their biggest album, Flood, so they are touring the States doing double set shows, one covering the album and the other, a regular set with song from their whole catalogue. They came to Detroit, and I got to go!

The audience for this type of show is a really particular one in that it covers a whole range of folks. Teens, people a good decade older than myself, some wearing elaborate outfits, and others in jeans and a t-shirt. It’s an eclectic fan-base, but everyone there was just looking for a good time. I’m sure I would have had fun if I were there on my own. The show itself was great. Not only are the old songs seeped in member berries, but the new stuff is great too.

What put the night over the top was going with my brother. He’s not as big a fan as I am, but he certainly appreciates the band. We made an evening of it, going nice and early. We got the best parking spot you could hope for (a legendary spot if there ever was one) and grabbed a beer across the street before the show started. We snagged some cool merch, sang along with the old songs, and stopped at a bar on the way home to revel in the experience.

We have some great memories (and like all friends, some less pleasant ones) but that evening will be up there with the best for a long time.

It was only the second time I went to see TMBG in concert, but I hope to go again. I doubt they plan on stopping any time soon, but who knows how long they can sustain that kind of tour schedule? Now, I’m going to listen to their latest album while I finish packing (unless I’m still at work when you read this. Then I’ll be doing that when I get home later). I should have the cover reveal for Broadcast Wasteland soon. I want to get the layout finished first, and the beta reads and final edits need to be done before that happens. Maybe couple of weeks. I’ll be riding high on that night and this event in the meantime. Stay tuned.