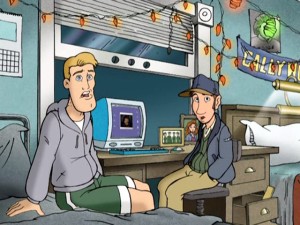 The Fall Book Crawl is over, and I’m not sure what to do with myself. That’s a lie. I have a literally endless list of things to do, but no events scheduled anytime soon. It’s about this time (often sooner) that Christian and I sit down and put together a list of events for us to approach and/or plan in the new year. It hasn’t happened yet, however, and I suspect that the delay is down to simple priorities. I was laser focused on the novella, and he is knee deep in his next novel. I’m at a standstill with the novella, though, with the second draft finished and doubt. As Christian goes over Broadcast Wasteland for me (another distraction from his novel) and I finalized the title of the next novella (a little early, but I have to put it in the back of this one) I have the comic as my main focus. Scripts are a tricky thing to write. You’d think that with so much free space and mostly just dialogue to write, it would be way easier. In my experience it isn’t.

There’s something about the visual nature of the script. Maybe it has to do with not describing as much of the scene or action. All I know is that one page of dialog with a couple of action and scene descriptions takes me longer than a full page of prose. It could be that just the change in format and thinking is enough to up the difficulty. I’m no scientist, so I don’t know. It’s a little slow going, but I’m finally making progress. I do have a plot outline done, but I think it’s too long. Otherwise, I’m about a quarter of the way in. A little more and I’m going to see if I can sit down with Glen (you know, Glen Hawkes, the creator and artist of the comic and the guy who did the cover to Broadcast Wasteland). I can’t wait to show off the cover, too. It’s a little early, though.

It’s been interesting. I’ve wanted to try my hand at writing comics (and other scripted based writing) for some time. It’s a direction I’d like to eventually take if I ever manage to write for a living. Not as a main focus. I think books will always be front and center, but some ideas work better visually, and often times diversifying can have its benefits. The problem with writing scripts is that someone else has to then make the thing (often many people). A lot of those people have their own stories they want to tell and I want to tell my stories. See how that works? Maybe after working with Glen for a while I can come at the concept a little more established and people will (could (maybe)) take me a little more seriously. I’d want to try it with publisher backing from the start. Self-publishing books is hard enough. Comics seem like an even harder thing to get off the ground with no backing (especially as just the writer).

In the mean time, I’ve finally gotten some more books around the city. I dropped a few off at Gertrude’s Writing Room in the Willistead Manor Coach House. That’s Vanessa Shields‘ workshop and writing space. She has quite a few local books along with her own. It’s a really neat place that’s worth checking out (especially for one of the workshops). I also got more books at the Anchor Coffee House on Huron Line. It’s my local haunt and they are kind enough to sell them for me. I always tell people they should go to Anchor for a really good cup of coffee. They have three locations in the city now, and I would be shocked if they don’t keep growing right across the country one day. So, while you’re patiently waiting for Broadcast Wasteland to come out, you should check out the first two books in the series, The Thinking Machine and The Neon Heart!