Now that I’m back into the swing of writing short stories (one finished, one almost finished) I’ve started to get caught up in thinking about the process of writing again. I’ve only done the first drafts of those shorts and I know that there is a lot to fix in them. I’m in no rush to do the second drafts. I tend to have the best results when I wait at least a month before getting into editing. For these stories, it may be longer since I’m going to jump back into the Invasion Novel as soon as the first beta read is back.

I think the reason I’ve fallen into thinking about writing is that I hadn’t finished a short story in a long time and now I have. Every once in a while, the process feels utterly strange. I have to take a step back and really work out what writing it. As the title states, it’s just thinking of things and writing them down. There’s more to it than that, but really, not much. The problem comes when let myself I think about it though. I get too into my own head.

I’ve even had to pull books off the shelf to show myself that what I’m producing is no different from the books I’ve read. Getting in my own way isn’t anything new. When doing simple things like throwing a ball, if I stop and think about it, I struggle. If I don’t think about it, then I just do it with no problems.

For some reason, whenever there is a transition (like going from editing to writing or from a novel to shorts) the issue is amplified. I kind of always feel rusty every time I sit down to write, but especially so when I’ve been editing. Sometimes my mental block happens in the middle of a long story, though. I’ll be chugging along knocking out a chapter day-after-day and I’ll just get stuck. Like a cat when its tong sticks out. I’m still not sure why that happens. Maybe it has something to do with repetition? Maybe it’s just general doubt. 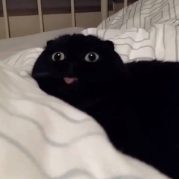 Thankfully, I’ve been able to easily overcome this phenomenon. Like I said, I’ve pulled books off of my shelf to calm my insecurity. I’ve also just told myself to stop thinking about it and finish the chapter. My attention span is so short that sometimes I forget. When all else fails, I have the Writing Wrecking Crew to check in with. It’s really nice to have a non-judgmental group of people who have their own (and sometimes the same) struggles. A “lol, me too” is as good a reassurance as any through self evaluation.