I can’t pinpoint the exact moment I decided I wanted to be a writer. I wasn’t a big reader as a kid and it was a while before I started to discover the type of books I really enjoyed. (I’m pretty sure the first book I read in a day was Sphere when I was home sick from grade school). I do remember always thinking up stories and imagining myself in my favorite movies as a kid. Maybe the first time I ever actually said I wanted to be a writer was in high school. The point is, that ever since I’ve wanted to be a writer, I’ve been on the lookout for compact, portable, distraction free writing solutions.

Not that I really needed it in high school. Other than a meandering short story I wrote for a grade eleven English class, I didn’t write a finished story until I was thirty. Still, as a teenager I had dreams of getting an old laptop that would be just good enough to write stories on. I had convinced myself that somehow that tool would totally change me and with it, I would be able to write all the time.

Obviously that isn’t true. Still, when I was in grade ten or eleven, I had a class that forced me to interact with kids from a nearby grade school. That’s when I discovered a neat word processor that kicked off my love of odd writing devices and niche withered technology. I’m not sure of what model it was, but the device was and AlphaSmart word processor.

It wasn’t as cool as a laptop, but that almost made it cooler, you know? I forgot about it for a long time, but when I got back into writing, I kept on the lookout for other portable writing options. I had a good laptop at the time, and I’d spent years writing essays for university on it, but that idea of a dedicated writing device stuck with me.

There have been some premium (code for expensive) dedicated writing devices over the years. While some of them looked interesting, I could never justify the price and they always came with some limitation. Maybe they’re bulky or pretentious, either way, I wasn’t interested. There have been some other neat devices I’ve discovered, but they were either hard to find, old by the time I knew they existed, or foreign products that would be difficult to get and come with their own host of complications.

Then, not too long ago, I stumbled across a neat phone with a keyboard built into it. I had tried using a tablet and wireless keyboard for writing in the past, but the separate devices and lackluster apps left that solution wanting. While the phone looked neat (and already had newer models on the market) it was the definition of a niche product. Not easy to get (especially in Canada) and more costly than I’m willing to spend for something that would ultimately be a toy (or a gamble). But that led me to a segment of late 90s/early 2000s computing that somehow totally passed me by.

I was never all that interested in PDAs when they came out. They were neat but seemed limited (and were super expensive for a teenager). I had no idea that they morphed into palmtop devices that were nearly pocket-able mini laptops. Talk about a perfect fit. I could have never afforded one when they were new, but there were a surprising number of used ones on the market (and a thriving community of users).

So, I bought one. It’s not perfect (as an example of the devices or as a portable, distraction free device). The one I have is an HP Jornada. It’s a Windows machine. It’s super dated, but it has a respectable version of word. It’s a little bulkier than I’d like, the battery could stand to be refurbished, and the screen is way to dim for any kind of sunlight. For the price I paid for it, though, it’s really cool. I haven’t tried to write a full short story on it yet (I was working on a way to transfer the files until very recently) but, I’m excited to have a new toy. 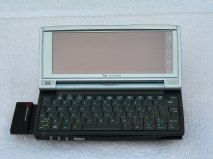 The big risk now is continuing to seek out other examples as potentially better options and spending a ton of money I don’t really have. (I may have a saved ebay search for a different model). I’m sure I’ll come up with an arbitrary rule to keep myself from going overboard. Like, maybe if I find a great example at a good price, I’ll be to pull the trigger, but not until after I’ve written a certain amount on the one I already have.

I’ll probably write an update when I do give short story writing on my palmtop a try. I’m also still on the lookout for the perfect device. So, stay tuned for further adventures of my weird obsessions!

2 thoughts on “The New Obsession”