Anyone who knows me probably knows that I’ve never been much of a group person. Most of the time I’m fine to just go it alone. That’s a good thing when it comes to writing since, for the most part, writing is a solo effort. There is a definite need for outside help when it comes to editing, but no one can write a story for you. With that in mind, I’ve found that there is a benefit to being part of a group (especially when the group is composed of good folks). Sometimes people will get under my skin, no matter how great they are or how well intentioned, but that’s my problem and I’ve been dealing with it.

As for what the benefits are, I’m sure I won’t mention all of them (or all of the detractors). What came to mind for me (and what prompted this post) is the all important outside perspective. There are few things that are quite as groundbreaking as when someone with a different perspective and potentially more experience shares some knowledge. 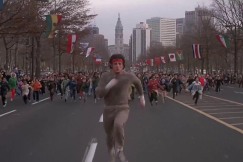 One that I think back on (that doesn’t have a lot to do with writing) is running. I don’t run all the time, but I’ve had periods where I’ve run regularly and when I was going to boxing, running was a big part of the class. The thing is, running sucks. It always sucks. At least for me. No matter how in shape I was or how often I was running, I always struggled at the start.

Then a friend who was a regular runner for years and often ran with other people told me that even for marathon runners, the first couple of minutes suck and that eventually your body just accepts what’s happening to it and settles in for the ride. I was flabbergasted. It all made sense. It was like when I learned that every first draft is terrible no matter how good you are as a writer. It’s supposed to be bad. That’s what editing is for. Sure, it gets less bad the better you get as a writer, but just having that reminder from an outside perspective changed the way I write (for the better).

There are other upsides to having a group. The good ones will offer support (or at least will listen to you complain). Encouragement from anyone is helpful, but even more so when the person giving it knows what you’re going through. Also, it doesn’t hurt to have some friendly competition to spur you on when you need that kick in the butt.

There has been a joke shared a lot in this pandemic, how it’s the worst group project most people have been in since high school. Who hasn’t experienced the pain and frustration of dealing with a bad group? I’ve found that a good group is as helpful as the bad ones are terrible. I’m very lucky that I have such a great group in the Writing Wrecking Crew. With that in mind, it took me way too long to get my last review done for one of them. At least now I can get back to work on my own book.

One thought on “The Benefit of a Group”