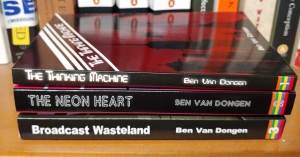 It’s a new month and more than halfway through this very strange year. The first draft of the Invasion Novel is done. It has been my working project off and on since the end of 2018 (before The Neon Heart was released). That’s not so good. If my memory serves me, though, it was written mostly in two big chunks. The first half (though closer to a third than a half) was written primarily over the summer of 2019. I had started before Neon came out in April of that year, but the bulk of the writing was done between the release and September when I put it on hold to write Broadcast Wasteland. The rest of the book was written during this pandemic from April (the release of Broadcast) and now. (Though to be honest I’m still working on it for the rest of the month including tomorrow).

Now that it’s August (this weekend), I’m putting the novel on hold again (this time in a better spot as time between drafts helps me be more critical when I start editing). It’s time to start the next novella! The current title is Break/Interrupt and it takes place back on Earth. I felt that I left the world and characters from The Thinking Machine dangling a bit and while I don’t want to make promises, there is a chance a character or two will get at least a mention if not a cameo. The bulk of the story is about a totally new protagonist (following the style of the other books in the series). I still have to work out the particulars of his personality, but my plan is to introduce an entirely new side to the megalopolis that I created in Thinking Machine and Neon Heart.

A major theme is going to be artificial intelligence and it’s potential role in our future. I’m personally terrified of AI, but there is a lot of potential good that could come out of the technology. But, I don’t want to get too much into the story. I want you to be eager to read it.

My hope is to get the first draft done in August by writing every day, similar to how I did Broadcast. I really hope I can keep it to a month this time as Broadcast took something like 49 straight days. The trick will be making sure this story is more focused. I want to bring the word count back down a little. I was better able to cut out the slow parts in Broadcast, but it and even more so the Invasion Novel, swelled way beyond my initial plan. I don’t want each book to get longer a longer for no reason. This story is designed to be more punchy and lean. I hope to keep it that way.

30 000 to 35 000 is my rough goal. So far nothing has turned out the way I’ve planned and I have no reason to think this will be different, but I’m going to keep trying. The cuts needed to the behemoth of the Invasion Novel are going to be tough enough to deal with. (It’s over 130 000 words and needs to be a lot closer to 90 000 when finished). I don’t want to have to do the same thing with the novella. Some trimming is inevitable, but meandering because I’m wary of writing tough scene won’t cut it. Anyway. Break/Interrupt is the new project. I gave myself even more time to edit and for beta reads this year. I made the deadline with Broadcast, but I had to ask a few generous reviewers to rush, and I don’t want to do that again.

If all goes according to plan, the first draft will be finished by the end of August and I’ll be able to get it into the hands of beta readers by the end of September. Then I’ll go back to editing the Invasion Novel. That’s going to take some time on its own and I’d love to start a new novel before the summer of next year (and keep speeding up the time it takes me to write them). Lots to do. Lots to improve. Here I go.