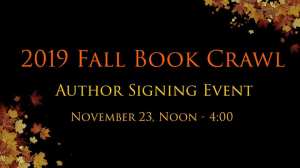 I’ve got one more event this year. It’s the Fall Book Crawl, a local author signing event at the Tecumseh Library on November 23rd. It’s a Saturday and I have no idea what to expect except for a bunch of authors (some I haven’t met before). It’s being organized by Tim Gabrielle, an author I haven’t met, but whose books I’ve spotted at Biblioasis. He’s done a good job so far getting a number of authors organized, finding prizes for a draw, and advertising the thing. I’ve been in his shoes a few times, so I know how much work it can be (and how you can never know what thing you do will or won’t bring in the people. Either way, it should be a good afternoon with a bunch of different genres represented and some new people to meet.

Speaking of genres, I finally got in more copies of Thinking Machine and Neon Heart. (That segue isn’t very good, but I’m sticking with it). I’ve been meaning to get an order in for months, but couldn’t seem to save up the cash. Eventually, I totally ran out of Neon and had to bite the bullet. I only got twenty Thinking and thirty Neon, putting the numbers at close to even. There’s more of a market for Neon since I’ve sold more Thinking (ideally) but since I sell them as a pack, I thought I should have both. Unfortunately the first batch I got wasn’t up to snuff. There were big strips of glue on the front and back of the books that were intrusive enough to push the covers open. Thankfully I got replacements, but that took time. I have some extra copies, though, so I may do another round of books for reviews. I didn’t get many reviews the last time I did it, but this time I’m going to be a lot more on top of the people who agree to the trade. 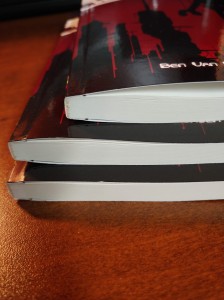 I’m almost done the second draft of Broadcast Wasteland. Really, I should be able to finish as of today. Obviously, all the parts I intended to cut are still in there. I was expecting a lot more to have to fix with the overall story, but it just seems to work. It’s really troubling. I’m worried that I’m either missing something, totally delusional, or I didn’t give myself enough time between the first and second drafts to be properly harsh with myself. I mean, that last one is a given. Ideally, I’d have months of distance so that I can really tear my writing to shreds. Whenever I practice a reading, I am tempted to make corrections and changes with that particular book. Maybe the experience of writing and editing is what helps me grow enough to be able to see those rough patches. I don’t know. It’s so hard to see when you’re in the middle of it. Thankfully, I have beta readers who can really go to town and tell me how wrong and bad at writing I am. It’s the only way to know if a book is any good or not.

I’m in an odd position where as I edit the current book, I have to start thinking about the next one. I put the title of the next novella in the back of the current one as a coming soon thing. Also, since I do the crossover thing between novellas, I’ve had to think hard about what I can put in Broadcast that will connect to both Neon and the new one. It means that I have to actually come up with a title, and I haven’t found the right one yet. I still have a few months, but the sooner I get it locked down, the better I’ll feel. With my layout template nearly perfected and the cover already done (except for the few adjustments Glen is waiting on from me, yet another thing I have to get to) I’m in a pretty good place. Good enough that the title of the next book is actually something that I can be concerned with. It all seems so silly. Oh well. I’m eager to get Broadcast into the hands of some beta readers, so I’d better get back to work on that. I hope to see you at the book crawl!