Back when I was just getting started with writing (before No Light Tomorrow came out) I was looking for writerly things happening around the city. I had joined Write on Windsor (which I believe Christian had found) and there was this other thing going on called Drink and Draw (also found by Christian). It was Friday nights at Squirrel Cage on the now hopping Maiden Lane. It was a neat place and a fun weekly event. I met a bunch of cool people and awesome artists. I was intent on doing the Zine back then, so having the artists help out was amazing. One of them even did the art for the second printing of No Light. Eventually, I got to know the owners. They are really nice guys from Toronto who are dedicated to opening cool and creative places in that area. The expanded to include a home decor shop, Bungalow, an ice cream parlor, Buuntz & Co., and a restaurant, A Dog’s Breakfast.

I managed to go to the soft opening of A Dog’s Breakfast and was surprised at the upscale take on a greasy-spoon-diner breakfast. Everything is rich, buttery, salty, and tasty. They made a few changes from that soft opening, but I try to get there, if not once a month, at least every couple of months. I have found myself there even more often when I have the time, or when I know I’m going to be downtown already. The service is good (there are regular servers who seem to pride themselves on getting to know the customers) the location is nice (especially for downtown) and the breakfast satisfies. I get my usual eggs over easy, toast, home fries, and coffee, but surprisingly they have a good sausage too. They are the only other place I have found that has a good breakfast sausage that is (almost always) cooked well.

The toast isn’t really toast. It’s actually fried bread (rye is available and like any good breakfast place, they give you more slices at the ends of the loaf). It’s great and goes along with the rest of the rich food, but that also means this is one of the least healthy breakfasts I get. The eggs are covered in butter (yum) and on the salty side. I definitely do not add any salt to this meal. The sausage is cooked on the well side, but is still tasty, and the home fries are deep fried and covered in coarse salt. Again, delicious, but I make sure to drink extra water when I’m there. I find I use a lot of Franks when I’m there (goes great with the basically french fries, home fries) but they have it in a squeeze bottle, which I find I like a lot. It allows a nice control rather than the commercial bottle’s droplets. Also, the coffee is some of the best diner coffee that I’ve had. It’s not specialty coffee like you get at Anchor, but it’s not quite as expensive, either. It fits well with the meal.

A Dog’s Breakfast is a trendy place, and that comes with some negatives (for someone like me who has to feel like he’s special). While the decor is bright and open, the tables seem to be more for look than function. They have a slat top that has been covered by a piece of glass. It works, but there is just something about it. It must be part of my nit-picky nature. I do like the feel of the place. It’s comfortable and the corner location gives a nice view of Maiden Lane and Pelissier. A lot has been done in the direct area to make it a nice place to be. The plate you get is rectangular and not very big, but most of the time, the food is piled up on it. That said, it may be the most expensive place to get breakfast in the city. It’s certainly the most expensive place I frequent. I do still go back, though. 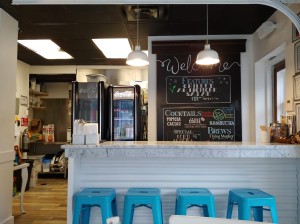 Part of the trendy nature and part of the place being associated with Squirrel Cage, means that people interested in a Toronto Style brunch flock to both locations on the weekends. That means both places are packed starting around ten and going into the afternoon. I totally avoid A Dog’s Breakfast on the Saturday or Sunday. I tend to avoid most of the breakfast places on the weekends, though (more often Sunday) because of the increase of people. I find it awkward to take up a table for just me when there is a lineup of people waiting to get in. If I do go somewhere, it’s a place with a counter. The other downside of A Dog’s Breakfast is a minor one. It’s downtown so you have to deal with downtown parking. There are a bunch of street spots close by, but it adds a buck or two to the meal. Totally worth it in my opinion.

I give A Dog’s Breakfast two stars for butter and salt, one for good sausage, and another because it’s cool. They lose one for the price and because I’m too cool for school. (So half for price and half for my personal hangups).