Sometime in the little break I get between Christmas and the New Year, I found myself at a local breakfast place. I’m a big fan of a classic breakfast, and I’ve probably been to most of the breakfast joints, greasy spoons, and diners in the city at one time or another. At this particular breakfast experience, I was chewing on a piece of bacon and thinking about how I normally like sausage, but most places don’t do sausage well (or don’t have a good product to work with) so I go with bacon instead. I know. Tough blow to take. The point is, that I was thinking about the different places I like to go, and what I like to get when I go there. Some places do the eggs really well, or the hash browns, or whatever. I thought, since I like breakfast so much, I may as well devote some of my weekly blog to it. So, for the rest of the year, I’m going to devote the last post of a month to doing a local breakfast review. Though, we’ll see how this works in practice. The post may float around if I have to promote something. P.S. Not a pancake fan, so when applicable, my brother may fill in a review for those.

To have a baseline, I thought I’d start with what I consider a good home cooked breakfast. My ideal home made breakfast was the weekly feast my grandma used to make for me after church when I was in high school. Every week, I’d tell her that I don’t need five eggs and half a pound of bacon. It took four years to get her down to three eggs and a quarter pound. Not only was that food cooked with love, it was cooked with years of experience and unrelenting patience. The eggs were a perfect over easy, with a fully cooked white and a runny yoke. The bacon was chewy, but firm (I later found out the secret was to cook it low and slow, let it sit, and heat it up just in time to plate. Too much work for a normal person, but grandmas aren’t normal). Along with toast, juice, and a lot of HP Sauce, that is my ideal breakfast. What put it over the top was the company of my grandmother and her delusions of my grandeur. I wish I had a picture of that perfect breakfast, but there were no camera phones back then (or they were pretty rare) so I just have my inflated memory. 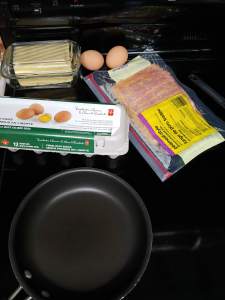 Now that I’m older, fatter, and making my breakfast on my own, things are a little more simple. I still eat a much too large breakfast in the mornings, but it’s something I look forward to every day (that I bother to make it). The bacon is peameal (I’ve convinced myself it’s healthier than the regular stuff) and I’m down to a more reasonable two eggs. Really, it’s a scaling system. An egg, a piece of bacon, a slice of toast, or two of each. I don’t really go for three. That has been too much for me for a long time.

I like my eggs over easy and my peameal cooked well (probably overcooked). Toast should be toasted (as in dark) and at home I use whole wheat (took some time to get on the wheat wagon). I think I do a pretty good job with my own breakfast. I’m terribly inconsistent, though. I often overcook my eggs, and I’ve been known to break the odd yoke. I’m much more into coffee now then I was at my grandmother’s. Also, I’d just as soon spice up my eggs with some franks as I would use the old HP sauce. (Dunking your toast into the yoke is the whole point for me). If I break the yokes (or am in the mood) I’ll turn it all into a sandwich with a bit of cheese melted in there. Also, the eggs don’t match up with the bacon, so with the two remaining eggs, I make myself an omelette (but not really an omelette, more like a fried frittata). I dip into the cheese again for that, and I’ll add some mushrooms or ham depending on what I have on hand.

Overall, I’d give making breakfast at home three stars. I get bonus points for making it myself, but I loose one for my inconsistency and a bunch because I have to make it myself and do the dishes. Also, variety is the spice of life, and I vary what I make, so I’m taking another extra point. 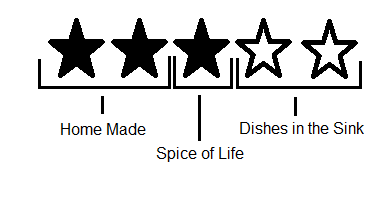