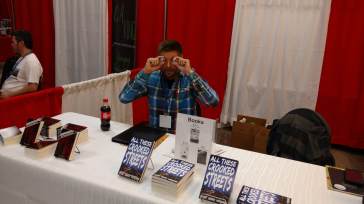 I can’t remember if I’ve been to Kitchener before. I know I’ve driven past it on the 401, I think I’ve driven through it before, and I know I have definitely been to Guelph. Last weekend was my first time spending any time in Kitchener. Usually, when I’m in another city for an event, there isn’t much time to do anything other than sit at the table (and occasionally check out other vendors) and grab a bite to eat before crashing at the hotel. Getting to do other things in the city is almost always a no go. There just isn’t enough time and often not enough money after paying for the table cost, hotel, gas, and food. There were a bunch of things happening in Kitchener, like the famous Oktoberfest, and while I didn’t get a chance to attend those festivities, I certainly felt the impact. Sadly, it was negative in nature.

Every event I go to is a risk. You put your money down and hope that there will be lots of people and lots of sales. Sometimes it works and you make a little cash, usually you end up losing a little, but the sales and exposure are worth the cost. This time, the gamble didn’t work out. I’m down a noticeable amount of money and the few books sold to the sparse crowd won’t make much of a long term impact.

It’s difficult to just take it on the chin, but there are no guarantees when it comes to being a vendor at an event. The best I can do it take the experience and data and use it to make more informed choices when it comes to attending future events. So far I’ve been lucky enough to come out of most things with a slight loss or even slighter gain, but also having met some interesting people and made some kind of impact in the city. The occasional flops are just part of the game.

I don’t want to talk badly about the event. For the most part things were good. There just weren’t people. The booths were big, there were a lot of vendors, there were a variety of guests, they had regular stage events and panels, and the venue was nice (though the event was split into two rooms which always causes some issues). As for Kitchener itself. For just driving through, crashing in a hotel over night, and grabbing fast food, it was unexceptional. It’s hard to judge a city on a small experience in a very localized area.The hotel itself was a bit grubby, but I’ve been in worse. Having to wander around a bunch of neighborhoods to find a fast food place was a pain, but, like I said, that was my entire experience. If I were attending Oktoberfest, I’m sure I’d have a lot more to say. It’s also hard to be objective when you are in the hole with nothing to show for it.

I wish things had turned out differently, but as it stands, I don’t think I’ll be back to Kitchener any time soon. I know there are other events in the city, but there are also other cities that I haven’t been too (or where I haven’t tried to sell books). If there is an opportunity to cut the cost, I may consider it, but I’d just as soon go to one of the other conventions in Kirchner and give this one some time to grow. I can happily go to local events year after year and hope things get better. There is a drastic cut in cost and time when the drive is a morning commute and I can eat and stay at home. Even some events in close by towns and cities are more reasonable investments. On the other hand, I do need to keep expanding, so those big risks will have to be regular things. This one didn’t pan out. Hopefully the next one will.

Official copies of the new book are in the mail.
About to crush a @slices_pop_up pie! Can't wait to relive the memories!