There are a few topics I’m going to get to with this post, but, while they are exciting and cool things, the biggest news is that this is the 300th post on this blog. Technically started in 2010 (around the end of the WLTP era) the regular weekly posts didn’t take hold until January of 2013 at post number 10. That’s 290 posts in five years (one week at a time). I’m pretty happy with that progress. It’s not the most amazing accomplishment, but I did it and there it is. I’m not sure how many words this whole blog is up to at this point, but last I checked I was passing 250 000, so I’m above that watermark at this point. I could do some simple math and come up with an average post length, but I don’t care, so I’m going to move on and talk about other stuff. If you’ve been following this blog for any length of time, thanks for sticking with it.

Last weekend, I was at the Tilbury Art in the Park with my perennial partner Christian Laforet and co-author of All These Crooked Streets, Edmond Gagnon. It was a two day affair under Ed’s canopy, sitting in lawn chairs, trying to sell books to people wandering down the path. There were a lot of vendors there selling a pretty good variety of stuff. There were Artists (obviously), crafters, food vendors, someone running a generator all day to stuff teddybears, and one other author. It was a little warm the first day, but it didn’t rain. A whack of folks walked by and other than the overwhelming number of laughs we got from asking if they liked to read, most people were receptive. It wasn’t the most successful event I’ve done, but I did walk away with some cash in my pocket.

The second day was far less attended, but cooler. We had perfected our comedy routine, though. The percentage of people who laughed, chuckled, and guffawed was huge. Easily more than half. We were all eager for that second day to end, but Tilbury has a beautiful park and the people are as nice as anywhere in the county. I even managed to escape with only a couple of bug bites. All-in-all, it was a successful weekend that I could have spent at work, dealing with drunk wedding folks. I think I made out better on the deal. Talking books, movies, politics, and so on with a couple of authors is a much better time.

On the Monday, my brother Jake and I took to the road for Day of Kings 2018. Back in 2016 we decided to go on an overnight trip to see a band we both like rather than buy each other a birthday present. Back then, we had an amazing time. The drive was fun, we saw a baseball game during the afternoon (which was fun), and we went to the concert in the evening. The show was a blast! The whole trip was a highlight of the year and we were eager to replicate it in 2017. Our busy lives got in the way, however, and the tradition had to wait until this year to continue. That’s this year. We decided to go to Cedar Point since it had been years since either of us had gone. It would provide a little road trip and a day of excitement. We even splurged on the line skip passes (a good choice if you don’t plan on going very often). 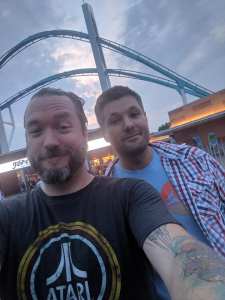 Everything went as planned. We had a great day, but at the end we decided to head home rather than find somewhere to spend the night (like we had planned). We can save the night out for any time, save a little money, and get some much needed work done. We are knee deep in basement construction (Jake and my dad are, I’m at the periphery). I’m way behind on both writing and podcasting too. We had a really fun day, so I think it was the right choice. Now we are planning what to do for next year’s Day of Kings and both back to the grind. Christian and I have put together the lineup and event page for the next ChiSeries Reading (on September 26th at Phog). Arvin and I have made some major progress with the far overdue episode three of Flags and High Fives, and Jake is making the most of his final days of vacation to make a big push in the basement and keep his weekly show schedule going. It’s a busy time, but I’m starting to feel like I’m on top of the eight-ball instead of behind it. (Not quite in front yet, though).